Venus on the Half-Shell and Others 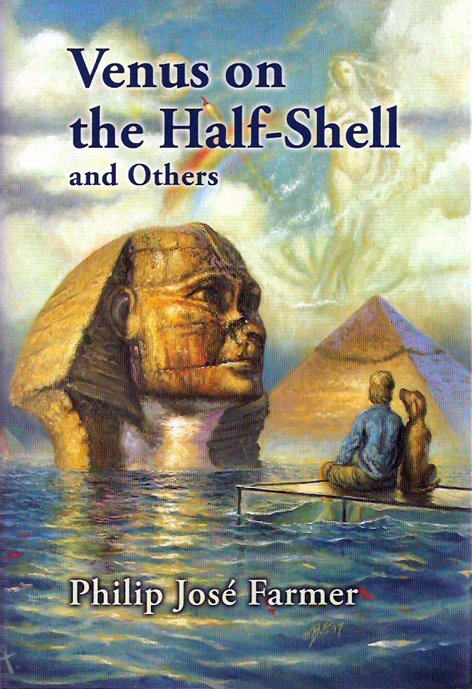 Venus on the Half-Shell and Others collects for the first time the best of the best from Philip José Farmer’s scintillating “fictional-author period.”

In the mid-1970s a fever-pitched furor was created when an actual novel purported to be by Kilgore Trout—the sadsack science fiction writer who appears as a character in the works of Kurt Vonnegut—materialized on the bookracks, complete with a mysterious back cover photo of the author looking like a bearded vagabond sage. Debate raged as to who had truly written Venus on the Half-Shell. Was it Vonnegut himself, or perhaps Theodore Sturgeon, rumored to have been the inspiration for Trout? Or did Kilgore Trout really exist? Just as one respected newspaper published an article “proving” that Vonnegut had written the book, the Hugo Award-winning science fiction author Philip Jose Farmer announced he was the true author.

The controversial Kilgore Trout episode was neither the first nor the last time Farmer would impishly slip out of his own skin and assume the persona of another author. In Venus on the Half-Shell and Others, Philip José Farmer transforms himself into fictional personalities as compelling as they are diverse: Cordwainer Bird, Paul Chapin, Rod Keen, Harry “Bunny” Manders, Leo Queequeg Tincrowdor, John H. Watson, M.D. and even the real-life author William S. Burroughs (writing his own version of Edgar Rice Burroughs’ Jungle Lord!). Also included is the original version of Farmer’s classic Sherlock Holmes/Lord Greystoke pastiche The Adventure of the Peerless Peer, back in print for the first time in over thirty years.

A unique collection, Venus on the Half-Shell and Others showcases the grand imagination of one of science fiction’s most resourceful and creative minds.

“Introduction: More Real Than Life Itself: Philip José Farmer’s Fictional-Author Period” by Christopher Paul Carey
“Why and How I Became Kilgore Trout”
Venus on the Half-Shell as by Kilgore Trout
“The Obscure Life and Hard Times of Kilgore Trout”
“The Jungle Rot Kid on the Nod”
“The Problem of the Sore Bridge—Among Others” as by Harry Manders
“The Volcano” as by Paul Chapin
“Osiris on Crutches” as by Leo Queequeg Tincrowder
“The Impotency of Bad Karma” as by Cordwainer Bird
“The Phantom of the Sewers” as by Rod Keen
“A Hole in Hell” as by Dane Helstrom
“The Last Rise of Nick Adams” as by Codwainer Bird
The Adventure of the Peerless Peer as by John H. Watson, M.D.
The Impotency of Bad Karma” as by Cordwainer Bird – the original version, later rewritten as “The Last Rise of Nick Adams”—lettered edition only
“Philip Jose Farmer as Fictional-Author: A Chronological Bibliography” by Christopher Paul Carey